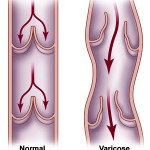 Varicose veins, also called varicosities, are veins that have become swollen, twisted, tortuous and are usually seen on the legs. People who get varicose veins often have a family history of someone with them, a particular constitutional type, along with a lifestyle that aggravates the condition. A common clinical presentation of this in the Arab World would be of a middle aged housewife who presents with swollen legs, discolored legs, excess weight, and a tendency to worry. Relevance to the development of varicose veins of each of the aspects of the description above will be explained below.

Genetics and gender has a lot to do with the development of varicosities. Women have 4 fold higher likelihood of developing varicosities than do men. Also, there is a genetically controlled weakness in the vein walls. The weakness results from abnormalities in structural components (proteoglycans) or excessive release of enzymes that break down proteoglycans, which leads to loss of integrity in the vein. Furthermore, individuals with varicose veins have a decreased ability to break down fibrin, a compound involved in clot and scar formation. When fibrin is deposited in the tissue near the varicosed veins, the skin becomes hard and lumpy due to the presence of fibrin and fat. As for why varicose veins usually start becoming noticeable as people get older, is because the walls of the veins weaken, and muscle mass and tone commonly decreases with age. The discoloration that is commonly seen in people with varicose veins is due to fluid retention (edema). Discoloration, and ulceration of the skin may develop due to lack of adequate blood flow to supply nutrients and remove wastes from the area. Veins, the part of the circulatory system that returns blood to the heart, are surprisingly frail structures. Unlike the arteries, which deliver blood to the body effortlessly (the beating of the heart provides all the pumping action necessary), the veins must rely on the expansion and contraction of surrounding muscles to push returning blood along. Eventually, when a number of valves have become damaged, the blood pools, stretching the vein until it becomes swollen, prominent and distorted.

One sure way to exacerbate this is by standing for long hours in one spot without much movement of the lower limbs. This can increase pressure in the legs up to 10 times!

Finally, another interesting note about varicose veins is that this phenomenon has been observed throughout the world and some cultures have recognized patterns and provided explanations quite different than the Western medical paradigm’s. The Chinese medical theory explains varicose veins from the perspective of yin, yang, and organ strength. According to the Chinese model, yang is a specialized energy within the body that serves a number of functions, one of them being to send energy higher up in the body. This energy is usually higher in men. Yin energy, on the other hand, is energy that is lower in nature and thus assists in sending nourishment to the lower parts of the body. Yin, as you may have guests, is higher in women. Varicose veins are seen as a result of decreased yang energies in the body, thus affecting more women, so they do not hold the veins as high and tight to the skin as they should. Instead, the excess yin energy is dragging them down. Another common feature the Chinese noticed was that most of these women who develop the varicosities are overweight, but one is not said to lead to the other. They see it as a common underlying reason affecting both symptoms, weight gain and varicose veins. That underlying reason is a deficiency of the Spleen energy. The Spleen, according to Chinese Energetics, has a tendency to retain heavy, damp energy, which inhibits it from producing healthy upward energy. As a result the body suffers from being dragged down and heavy. That persistent heaviness in the veins results in them hanging down further and further the longer the spleen remains deficient. One way the Spleen becomes deficient is by excessive worrying. As you can see, the picture of the mother who stays at home all day, worrying about the family and doing chores that demand long periods of standing, such as ironing or cooking, brings together the ideal situation in which varicosities to develop.

Interestingly, there is a contrast in the rate of occurrence of varicosities in US and other developed countries to their occurrence in less developed nations. Varicose veins are rarely seen in the underdeveloped areas where where high-fiber foods and unrefined diets are consumed, but is seen in similar rates in developed countries that make processed food products highly available.

-Add whole grains other than whole wheat, especially buckwheat. Buckwheat contains the bioflavonoidrutin. Rutin reduces capillary fragility, increases the integrity of the venous wall, inhibits the breakdown of the compounds composing the ground substance, and increases the muscular tone of the vein.

-Increase consumption of blue-red berries such as blackberries, cherries, and blueberries. These berries strengthen and support the structures of veins as well as the vascular system as a whole. They are rich inrutin, as described under buckwheat above, proanthocyanidins and anthocyanidins. which are flavonoid compounds.

-Consume onions, ginger and cayenne frequently and liberally because they can help fibrin to break down. A decreased ability to break down fibrin, a protein involved in blood clot and scar formation, causes increased depositing of near varicosed veins. This results in a condition called lipodermatosclerosis, where the skin becomes hard and lumpy.

–Vitamin C: The healthy production of collagen, the most abundant protein in the body that forms all types of tissues in the body, is necessary for production of blood vessels as well. Vitamin C strengthens the collagen structures of the veins. Another side benefit of Vitamin C is that it inhibits platelet aggregation, and regenerates oxidized vitamin E, enabling it to resume its protective activities.

–Bioflavonoids: If one cannot get enough of the bioflavanoids from the foods mentioned above, supplementation is important, particularly with the anthocyanosides (the blue-red pigments found in berries). This pigment enhances the effects of vitamin C, stabilizes the collagen matrix by preventing free radical damage, inhibiting enzymes from cleaving the

Certain herbs are know as having venotonic activity. Venotonics are herbs that enhance the structure, function, and tone of veins. Further, according to the Chinese energetics some of these herbs help to tonify and the yang energy in the body. The most widely used of the herbs below are grape seed and pine bark, and they are possibly most effective. Some prominent herbal tonics include:

–Aesculus hippocastanum is recommended to be used away from medications that can thin the blood thin such as aspirin or anticoagulants.

The natural treatments outlined above are effective at relieving the symptoms associated with varicose veins. While small spider veins may resolve entirely, larger, well-defined varicose veins will not disappear. Although there are other natural treatments for varicosities, such as compression stockings, the above programs can produce results as good as or better in most cases. Further, looking at dietary intake and resolving problems from the inside out is closer to the root cause, compared to applying treatments from the outside. Compression stockings may manage the varicosities temporarily while they are on, but proper nutrition may rid them a more lasting period, without the hassle or discomfort. Also, unlike compression stockings, this program will strengthen the walls of the veins, reducing the risk of developing

additional varicose veins. In cases of severe varicose veins, certain surgical procedures may be appropriate, but it makes more sense to explore less invasive means first. Furthermore, if nutrition and are not used at all, the body still has the predisposition to develop new varicosities as time passes.