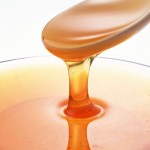 Well we already knew this, but for the record, honey can sooth a cough!

Results were recently published in the journal Pediatrics that honey is more effective than a placebo in controlling nighttime cough in children with upper respiratory infections (URI). The study was a randomized placebo-controlled, double-blind trial.

Here is a the story as related by cbc news:

Coughs from upper respiratory infections lead to discomfort for children, sleepless nights for parents and kids, and missed school and work days.

All types of honey were better than placebo in alleviating cough in children, researchers found.

Parents may turn to over-the-counter medications despite advice from regulators including Health Canada and the U.S. Food and Drug Administration that the medications lack proof of effectiveness and have been linked to inadvertent overdose deaths in young children.

Israeli researchers put honey to the test against a sticky, sweet and brown placebo for 300 children one to five years old. The kids had upper respiratory infections with coughing at night and an illness that lasted seven days at most.

“Honey may be a preferable treatment of cough and sleep difficulties associated with childhood upper respiratory infection,” Dr. Herman Avner Cohen of Tel Aviv University and his authors concluded in Monday’s issue of the journal Pediatrics.

“In light of this study, honey can be considered an effective and safe treatment of children over one year of age.”

Health authorities say honey should not be given to children under one year old because of the risk of infant botulism.

For the Israeli study, children were randomly assigned to take 10 grams of eucalyptus honey, citrus honey, labiatae honey or silan date extract as a placebo. The kids took the products 30 minutes before bedtime.

Parents rated the products based on:

All types of honey were better than placebo in alleviating cough, the researchers found.

Adverse events, such as stomach ache, nausea and vomiting, were about the same between groups.

The survey was subjective and only one dose was given, the researchers said in describing the limitations of the study.