If you think medical advice on healthy living – good nutrients, exercise and stress free existence is a modern medical practice, you might want to think again and join us to discover 5 medical books from 1,000 years ago that explored those exact topics. Similar manuscripts of work on anatomy contained illustrated chapters on five systems of the body: bones, nerves, muscles, veins and arteries. This page depicts the arteries, with the internal organs shown in watercolors

During the Golden Age of Muslim Civilisation medical care was free to all. Hospitals were built in many cities across the Muslim World, and cutting-edge treatments such as cataract operations, regular vaccinations, internal stitching, bone setting, and medical eduction in teaching hospitals were part of standard practice, as was the awareness of the importance of nutrition and exercise in maintaining life and preserving health.

Many medical scholars realised the bad effects of unhealthy eating habits and acknowledged the importance of sports, bathing, proper dieting and sleep regulation in preserving good health – concepts that have strong resemblance to the modern day preventive medicine, and ones that echo the campaigning for healthy dieting and regular movement in combating many conditions like obesity and diabetes today.

Let us explore some of the works from that era that described links between obesity and the lack of healthy habits and practices.

The Sheikh al-Ra’is Sharaf al-Mulk Abu ‘Ali al-Husayn b. ‘Abd Allah b. al-Hasan b. ‘Ali Ibn Sina, known in Latin as Avicenna and his most famous works are those on philosophy and medicine. In medicine, one of his better known books is his encyclpedic book, Al Qanun Fi Al-Tibb (The Canon of Medicine)- which was translated into Latin towards the end of the twelfth century CE, and became a reference source for medical studies in the universities of Europe until the end of the seventeenth century.

Ibn Sina devoted a section of the 3rd volume of this famous ‘Canon” to the ‘Drawbacks of excessive Obesity’ listing obesity as a disease and suggesting tearing it with hard exercise and lean foods. Mohamed ibn Zakaria Al-Razi (Rhazes, 841–926) critically assessed, in his book Al-Hawi Fit-Tibb (An Encyclopaedia of Medicine), all the available knowledge on obesity at that time. In light of his own experience and practice, he discussed the opinions of scholars who preceded him particularly in relation to the management of excessive obesity. Al-Razi documented his discussion using clinical case reports of the patients with excessive obesity he successfully treated, describing in detail the treatments he used, including diet, drugs, exercises, massage, hydrotherapy, and lifestyle changes.

Additionally, he authored a special book (Kitāb Manafiʿ al-Aghdhiyah wa-Dafʿi Madhārriha) on how to keep away the side effects of nutrients and made it more self-explanatory and comprehensive than those of his predecessors.

From a random Arabic book on Herbal Medicine (Source)

Ibn Hubal Al-Baghdadi (1121 – 1213) was an Arab physician and scientist known primarily for his medical compendium titled Kitab al-Mukhatarat fi al-Tibb (the Book of Selections in Medicine), which was written in 1165 in Mosul in Iraq.

He reported in his work on the predisposition of “hugely obese persons” to fall ill quickly. In their management, by heavy exercises on an empty stomach, he stressed the importance of a gradually increasing schedule because an excessively obese person may put himself at risk if he starts abruptly on heavy activities.

He wrote a number of works including his most famous Kitab al-Shamil fi ‘l-Sina’a al-Tibbiyya (Comprehensive Book in the Art of Medicine). In one of his other works Al Mujiz Fit-Tibb (The Concise Book of Medicine) book he reported on the association between excessive obesity and cardiovascular and cerebrovascular accidents, and with respiratory and endocrine disorders:

From one of the Timbuktu’s manuscripts (Source)

Najib ad-Din Abu Hamid Muhammad ibn Ali ibn Umar Samarqandi was a 13th-century Persian physician from Samarqandi. He was a prolific medical writer and expositor of medical ideas, though few details are known of his life. His most famous book was “The Book of Causes and Symptoms”, a comprehensive manual of therapeutics and pathology. The treatises were widely read and often commentaries were written on them.

In  his work “The Book of Food and Drink for the Healthy People”, he defined the proper nutritive food as that which is able to replace what disintegrates off the constituent elements of the body parts. 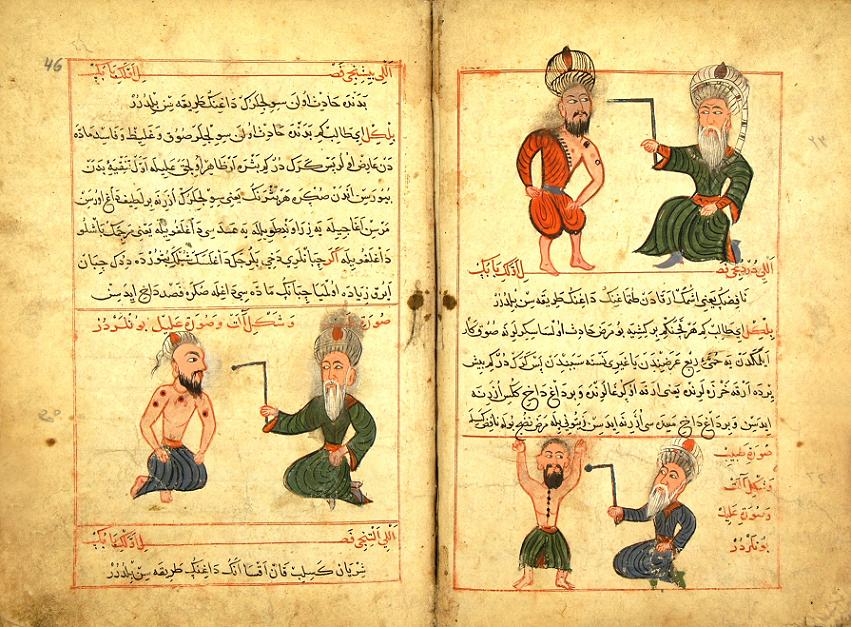 Some other achievements are outlined by Campbell:

Durant makes another excellent summary of Islamic medical achievements, which he says: