“Whose name will be the Victorious, Soeshyant and whose name will be Astvat-ereta. He will be Soeshyant (The Beneficent one) because he will benefit the whole bodily world. He will be Astvat-ereta (he who makes the people, bodily creatures rise up) because as a bodily creature and as a living being he will stand against the destruction of the bodily (being) creatures to withstand the drug of the two footed brood, to withstand the evil done by the faithful (idolaters and the like and the errors of the Mazdaynians)”.

This Prophecy applies to no other person more perfectly than it does to Muhammad (PBUH):

The Prophet was not only victorious at Fatah Makkah but was also merciful when he let go the blood thirsty opponents by saying: “There shall be no reproof against you this day”.

Astvat-ereta is derived from the root word Astu which in Sanskrit as well as in Zend means ‘to praise’. The infinitive Sitaudan in present day Persian means praising. It can also be derived from the Persian root word istadan which would mean ‘one who makes a thing rise up’. Therefore Astvat-ereta means the one who praised, which is the exact translation of the Arabic word ‘Ahmed’ which is another name for Prophet Muhammad (PBUH). The Prophecy clearly mentions both the names of the Prophet i.e. Muhammad (PBUH) and Ahmed (PBUH).

The Prophecy further says that he will benefit the whole bodily world and the Qur’an testifies this in Surah Al-Anbiya chapter 21 verse 107:

“And there shall his friends come forward, the friends of Astvat-ereta, who are fiend-smitting, well thinking, well-speaking, well-doing, following the good law and whose tongues have never uttered a word of falsehood.”

Here too Prophet Muhammad (PBUH) is mentioned by name as Astvat-ereta.

There is also a mention of the Prophet’s friends as companions who will be fighting the evil; pious, holy men having good moral values and always speaking the truth. This is a clear reference to the Sahabas – the prophet’s companions.

Prophet Muhammad (PBUH) in Dasatir:
The sum and substance of the prophecy mentioned in Dasatir is: That when the Zoroastrian people will forsake their religion and will become dissolute, a man will rise in Arabia, whose followers will conquer Persian and subjugate the arrogant Persians. Instead of worshipping fire in their own temples, they will turn their faces in prayer towards Kaaba of Abraham (PBUH) which will be cleared of all idols. They (the followers of the Arabian Prophet), will be a mercy unto the world. They will become masters of Persia, Madain, Tus, Balkh, the sacred places of the Zoroastrians and the neighbouring territories. Their Prophet will be an eloquent man telling miraculous things.

This Prophecy relates to no other person but to Muhammad (PBUH).

“Muhammad is not the father of any of your men, but (he is) the Messenger of Allah, and the Seal of the Prophets: and Allah has full knowledge of all things.”
[Al-Qur’an 33:40] 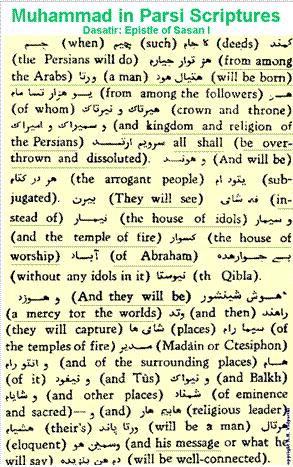