Growth and Division in a Dynamic Protocell Model.

Growth and Division in a Dynamic Protocell Model.

Growth and Division in a Dynamic Protocell Model

In this paper a new model of growing and dividing protocells is described, whose main features are (i) a lipid container that grows according to the composition of the molecular milieu (ii) a set of “genetic memory molecules” (GMMs) that undergo catalytic reactions in the internal aqueous phase and (iii) a set of stochastic kinetic equations for the GMMs. The mass exchange between the external environment and the internal phase is described by simulating a semipermeable membrane and a flow driven by the differences in chemical potentials, thereby avoiding to resort to sometimes misleading simplifications, e.g., that of a flow reactor. Under simple assumptions, it is shown that synchronization takes place between the rate of replication of the GMMs and that of the container, provided that the set of reactions hosts a so-called RAF (Reflexive Autocatalytic, Food-generated) set whose influence on synchronization is hereafter discussed. It is also shown that a slight modification of the basic model that takes into account a rate-limiting term, makes possible the growth of novelties, allowing in such a way suitable evolution: so the model represents an effective basis for understanding the main abstract properties of populations of protocells. View Full-Text
Keywords: protocell; synchronization; collectively replicating chemical systems; dynamical models; artificial chemistries; emergence of novelties; evolvability 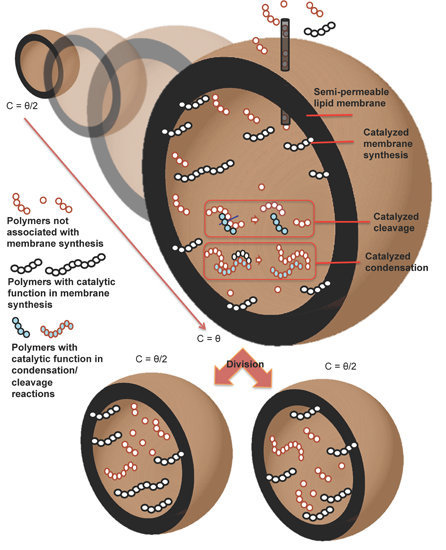 This is an open access article distributed under the Creative Commons Attribution License which permits unrestricted use, distribution, and reproduction in any medium, provided the original work is properly cited
Link collected : https://www.mdpi.com/2075-1729/4/4/837
Rehan Zaidi2021-02-02T19:16:38+02:00
Go to Top