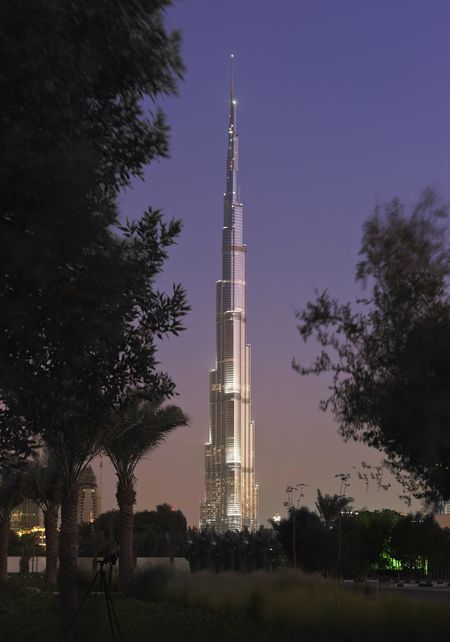 One of the odder, more complicated moments in the history of architectural symbolism will arrive Monday with the formal opening of the Burj Dubai skyscraper. At about 2,600 feet high — the official figure is still being kept secret by developer Emaar Properties — and 160 stories, the tower, set back half a mile or so from Dubai’s busy Sheikh Zayed Road, will officially take its place as the tallest building in the world.

Designed by Adrian Smith, a former partner in the Chicago office of Skidmore, Owings & Merrill, the Burj Dubai is an impossible-to-miss sign of the degree to which architectural ambition — at least the kind that can be measured in feet or number of stories — has migrated in recent years from North America and Europe to Asia and the Middle East. It is roughly as tall as the World Trade Center towers piled one atop the other. Its closest competition is Toronto’s CN Tower, which is not really a building at all, holding only satellites and observation decks, and is in any case nearly 900 feet shorter.

Monday’s ribbon-cutting, though, could hardly come at a more awkward time. Dubai, the most populous member of the United Arab Emirates, continues to deal with a massive real estate collapse that has sent shock waves through financial markets around the world and forced the ambitious city-state, in a significant blow to its pride, to seek repeated billion-dollar bailouts from neighboring Abu Dhabi. Conceived at the height of local optimism about Dubai’s place in the region and the world, this seemingly endless bean-stock tower, which holds an Armani Hotel on its lower floors with apartments and offices above, has flooded Dubai with a good deal more residential and commercial space than the market can possibly bear.

And so here is the Burj Dubai’s real symbolic importance: It is mostly empty, and is likely to stay that way for the foreseeable future. Though most of its 900 apartments have been sold, virtually all were bought three years ago — near the top of the market — and primarily as investments, not as places to live. (“A lot of those purchases were speculative,” Smith, in something of an understatement, told me in a phone interview.) And there’s virtually no demand in Dubai at the moment for office space. The Burj Dubai has 37 floors of office space.

Though Emaar is understandably reluctant to disclose how much of the tower is or will be occupied — it did not reply to e-mails sent this week on that score — it’s fair to assume that like many of Dubai’s new skyscrapers it is a long, long way from being full. In that sense the building is a powerful iconic presence in ways that have little directly to do with its record-breaking height. To a remarkable degree, the metaphors and symbols of the built environment have been dominated in recent months by images of unneeded, sealed-off, ruined, forlorn or forsaken buildings and cityscapes. The Burj Dubai is just the latest — and biggest — in this string of monuments to architectural vacancy.

The combination of overbuilding during the boom years, thanks to easy credit, and the sudden paralysis of the financial markets in the fall of 2008 has created an unprecedented supply of unwanted or under-occupied real estate around the world. At the same time, rising cultural worry about environmental disaster or some other end-of-days scenario has produced a recent stream of books, movies and photography imagining cities and pieces of architecture emptied of nearly all signs of human presence.

And so in the same week that you could read the news that the Sahara Hotel and Casino in Las Vegas has entirely sealed off two of its three towers (and its buffet!) for the holiday season, citing slow demand, you could head to the multiplex to watch the movie version of Cormac McCarthy’s novel “The Road,” in which a father and son wander through a post-apocalyptic landscape where buildings for the most part have been reduced to burned-out shells.

And it’s not just “The Road”: The Roland Emmerich destruction-fest “2012” and the upcoming Denzel Washington vehicle “The Book of Eli” are full of similar images; Jason Reitman’s “Up in the Air” moves its characters through a series of downsized companies where abandoned desk chairs swim in empty space. 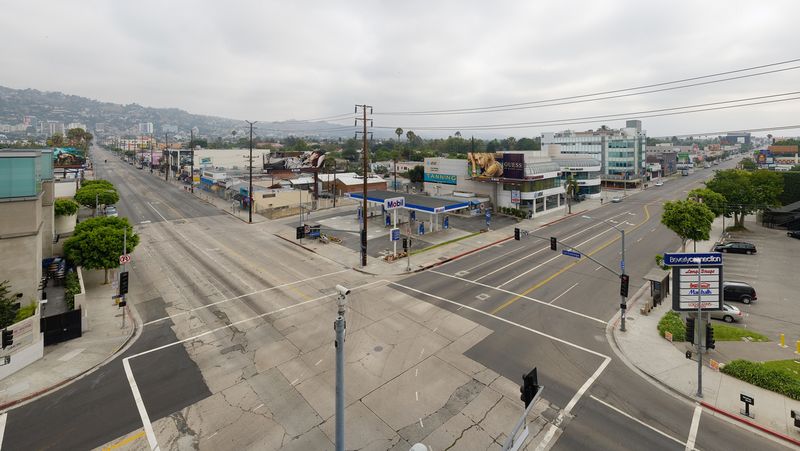 Or you might discover online a group of photographs called “Empty L.A.,” part of a series completed recently by Matt Logue, showing a number of recognizable intersections and stretches of freeway in and around the city where people, cars and other signs of life have been scrubbed away, presumably through digital manipulation — and in the same trip around the Internet find a Q&A in Entrepreneur magazine with a man named Mike Enos, who runs a firm that encloses foreclosed houses, half-built hotels and other objects in plastic wrap and reports a surge in business since the economic collapse last year.

This movement in the direction of emptiness is profoundly difficult for contemporary culture — and particularly American culture — to grapple with. Occasional recessions and other setbacks aside, we assume that our national trajectory always moves toward fullness, that our cultural progress can be measured by how much new square footage we’ve created and occupied.

But that process has completely reversed itself in many of cities hardest hit by economic crisis. Detroit, as Rebecca Solnit put it in Harper’s Magazine, “is now so depopulated that some stretches resemble the outlying farmland and others are altogether wild.” And as P.J. Huffstutter reported recently in The Times, Hantz Farms is planning to buy and plant as many as 5,000 acres of land within the Detroit city limits.

In Los Angeles, there are parking lots where great towers, planned during the exuberant middle of the last decade, were supposed to be. At Rick Caruso’s Americana at Brand complex in Glendale, every one of the development’s 100 condominiums sat empty during 2009, even as shoppers browsed in the stores below. Occupancy wasn’t allowed until more than half of the units had been sold, a mark that was finally reached in December. 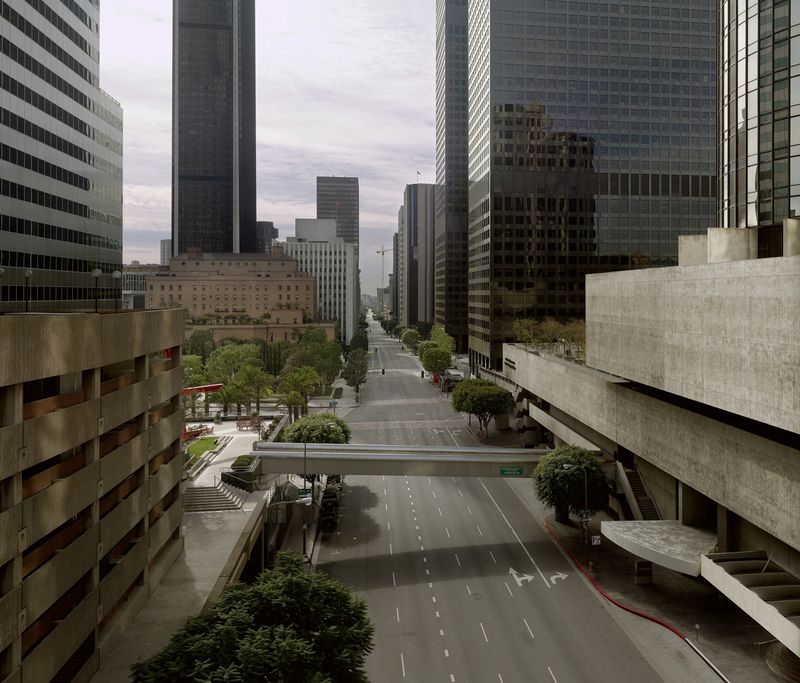 As super-tall buildings go, the Burj Dubai is elegant. Smith is an unusually talented shaper of skyscraper form, as he proved at Shanghai’s 88-story Jin Mao Tower, which he designed before leaving SOM in 2006. The Burj Dubai’s profile, which Smith says is inspired by a range of local influences including sand dunes and minarets, grows more slender as it rises, like a plant whose upper stalks have been peeled away.

But the extent to which the building had to battle worries about the wisdom of its construction even before it was finished — the way it seemed doomed, at least in financial terms, while it was still going up — may be unique in the history of skyscraper design. In that sense it seems impossible to write about the Burj Dubai without at least mentioning the Tower of Babel, which also, if the biblical story and various historical sketches are to be believed, combined a tapering, corkscrew design with heaps of overconfidence.

Dubai’s economy will recover, at least in some chastened form. But the hyper-confident Dubai that Smith’s tower was designed to mark and call global attention to is already dead, as is the broader notion, which the emirate came to symbolize over the last decade, that growth can operate as its own economic engine, feeding endlessly and ravenously on itself.

If the Burj Dubai is too shiny, confidently designed and expertly engineered to be a ruin itself, it is surely the marker — the tombstone — for some ruined ideas.