Diaphragmatic Breathing Exercise
In the name of Allah, Most Merciful and Compassionate 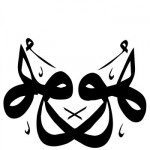 (1) One intends drawing nearer to Allah through His remembrance, then sits back as one does in the Testification of Faith of the prayer, facing the qibla, keeping one’s eyes as still as possible or even closed, breathing through the nose. If one cannot face the qibla, then one may do so however one can, facing any direction with the body, but Allah with the heart.

(2) One says Huwa Llah (He is Allah) silently in one’s heart (with something like the same cadence as in the middle of the hadra, if one has heard it) drawing out the first word as one breathes in deeply and slowly (filling the lungs from bottom to top ), and the second word as one breathes out. One should make this as a deep sigh, first filling the bottom of the lungs by lowering the diaphragm and pushing the belly out; then the middle part of the lungs with an expansion of the lower ribs, then breastbone and chest; then the highest point of the lungs up to the collarbone, lifting the chest and upper ribs and slightly drawing in the stomach-all in one smooth, continuous motion, not three-then breathing completely out. This is done three times. (To see if one is doing the diaphragm breathing correctly before doing Zayn al-Anfas the first time, one may wish to lie on one’s back, put a book on one’s stomach, and try to “lift” it with each breath until one succeeds.)

(3) Then one “watches” (yuraqibu) one’s breaths, breathing quietly, regularly, deeply, and without strain; as one breathes in, making oneself totally empty in neediness (faqr) to Allah, and as one breathes out, feeling absolute contentment (rida) with Allah. This is done ten times. It is best when possible to sit back as one does in the prayer, holding one’s palms about two centimeters above one’s thighs, and beginning with the little finger of the right hand, lowering the fingertip to the thigh as one breathes out, and lifting it off with the other fingers as one breathes in, then lowering the next finger to the thigh with the next breath out, and so on, until one finishes the last breath with the little finger of the left hand.

(4) Then one says Huwa Llah as in (2) a final time, summoning to mind the absolute love of Allah above any other.

(5) This dhikr should be done by all murids at least once a day, on an empty stomach, whether in the morning, midday, or night, though it may be done as needed, up to five times. In situations where sitting or concentration is difficult during the day, one may substitute in (3) above the reciting in one’s heart of verse 26 of Sura al-Shu‘ara’: Wa idha maridtu, fa Huwa yashfin (“And when I am ill, He heals me”), saying the words Wa idha maridtu as one breathes in, and fa Huwa yashfin as one breathes out, seeking the divine shifa’ or healing for the ruh, mind, and body. And Allah alone gives success, and He guides the way.