Many patients ask if there is a natural alternative to Clomid. The short answer is that many natural treatments work just as well as, and in the vast majority of cases, MUCH better than Clomid. Clomid is a first-line drug used to treat infertility. It is often used in cases of PCOS with delayed or absent ovulation and in unexplained infertility, as the very first drug intervention.Alternative to Clomid 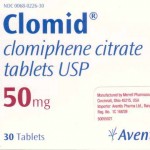 Clomid (also known as clomiphene), is a selective estrogen receptor modulator. It works by inhibiting the estrogen receptors in the hypothalamus (the area of the brain that controls the reproductive hormones).

Normally, estrogen is produced by the follicles or eggs as they grow and develop in a woman’s menstrual cycle. The estrogen levels increase as the follicle gets bigger and approaches the time of ovulation. The hypothalamus messages the pituitary gland to produce gonadotropins, the hormones that stimulate the egg to grow, produce estrogen and eventually rupture in ovulation. By cycle day 22, the estrogen and progesterone levels are quite elevated. The hypothalamus senses the high levels of hormones and stops stimulating the pituitary, preventing follicles from continuing to grow when implantation of a fertilized embryo should be happening.

When Clomid is used (usually for 5 days starting at day 5 of the cycle), the follicle grows as usual early in the cycle. However, the hypothalamus does not detect the high estrogen because Clomid blocks its estrogen receptors. Rather than slowing the production of gonadotrophins as it normally would, it continues to secrete more of them in a rapid pulsatile pattern, fooled by the low estrogen into thinking that the follicle needs more help to develop. This is the stimulation process of Clomid, which can sometimes result in more than one follicle developing in the cycle (Clomid cycles have a higher rate of multiples compared to natural cycles). The rapid pulsing hormone pattern eventually causes the egg to be ovulated, approximately 6-7 days after the course of Clomid.

Clomid does also have its dark side. It thins the endometrial lining and reduces the amount of fertile mucous. It also has a half-life of a week, meaning that the drug and it’s effects linger in the body for quite some time. This results in additive negative side effects, especially for patients doing more than one Clomid cycle in a row. And finally, Clomid raises the incidence of multiple birth tenfold, increasing the rate of complications during pregnancy and delivery.
A Natural Alternative to Clomid?

A natural alternative to Clomid can come in many forms. The first consideration should be to determine exactly why you are experiencing fertility challenges. Drugs like Clomid should never be used without finding out the reasons for your fertility struggles. Comprehensive testing should be completed in order to identify causes such as lack of ovulation or PCOS, thyroid related concerns, autoimmune infertility, poor egg quality, low ovarian reserve, luteal phase defect, endometriosis, metabolic or hormonal imbalances. If you’ve been grouped into the unexplained infertility category, underlying factors can nearly always be idenfified. With this in mind, optimal treatments to promote natural fertility can vary greatly.

But you didn’t think I was just going to leave you hanging, did you?

A brand new study, to be released in May 2013 compared a well-known natural therapeutic with Clomid. In this study, 100 Egyptian women with PCOS were split into two groups. The women would receive either Clomid, or a compound made from Cimicifuga racemosa, more commonly known as Black Cohosh. The fifty women assigned to the Clomid group received the drug for 5 days, as is often the case in clinical fertility treatment. The other fifty women received a dose of Black Cohosh for 10 days.

The results were impressive. The Black Cohosh group showed significant improvements in key gonadotropin markers such as LH and LH/FSH ratios. Not only that, but the Black Cohosh group had better progesterone levels, indicating stronger, healthier ovulation and greater chances of implantation.

The endometrial lining was significantly thicker in the Black Cohosh group, which makes sense considering that Clomid thins the endometrial lining for many women. Although it did not reach clinical significance, the pregnancy rate was also higher in the patients who received Black Cohosh, when compared to those who received Clomid.
How does It Work?

Alternative to ClomidBlack Cohosh is enigmatic in its exact mechanisms of action. Long used as a women’s health therapeutic, it has been thought to contain phytoestrogenic components. Other studies have shown many different mechanisms of action, ranging from serotonin-like effects to anti-inflammatory effects. In fact, several studies have called into question the power or existence of phytoestrogenic compounds in Black Cohosh. These studies indicate that other components of the plant may be the ones responsible for it’s key restorative actions. There is some evidence that Black Cohosh may actually have selective estrogen receptor modulator actions in the pituitary and hypothalamus.

Interestingly, PCOS is a condition with strong inflammatory and immunological components. Studies have found elevated cytokines within the follicles of women with PCOS. High levels of inflammatory chemicals such as Il-6 and TNF-alpha are also present, known to interfere with healthy fertility. Inflammation and autoimmune processes have profound effects on the female reproductive system.

Black Cohosh is able to reduce these inflammatory compounds. So this plant may act as an anti-inflammatory treatment with hormonal receptor activity, and mood boosting actions. Quite different from the simple phytoestrogen it was once thought to be!

This is not the first time that Clomid and Black Cohosh have gotten together in a study. You might also want to check out my other post on how Black Cohosh can actually minimize the negative side effects of Clomid.

This study illustrates that inflammation can influence a myriad of factors relating to ovulation and fertility. Even in the case where a medication is able to alter the hormones to induce ovulation, we see here that a compound that with added anti-inflammatory effects provides even better results.

It should be noted that Black Cohosh should be viewed as a prescription medication to be used only under the supervision of a physician. It should never be used by patients with compromised liver function and has numerous drug interactions.