A sauna does more than build up a sweat – it can be a life saver, say researchers.

Middle-aged men who take frequent saunas are around half as likely to die from heart conditions as those who do not, according to a new study.Regular sessions also appear to protect against early deaths from any cause, lowering the risk by 40 per cent for those having a once-daily sauna.Overall, those who visited saunas most often – as much as once every day – experienced the greatest benefit.Even compared with men who took one sauna a week, their risk of dying from cardiovascular disease was 50 per cent lower. 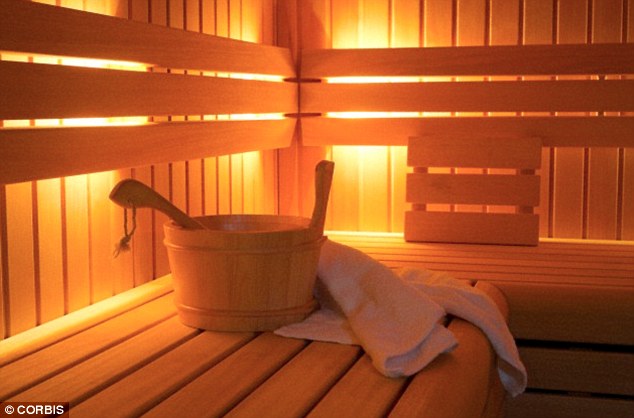 Benefit: Regular saunas appear to protect against early deaths from any cause. Overall, those who visited saunas most often – as much as once every day – experienced the greatest benefitLonger time spent sweating it out in each sauna session also enhanced the health benefits, with more than 20 minutes offering the most protection.The study was conducted among 2,315 men aged 42 to 60 from eastern Finland, where there is a strong sauna tradition.Researchers followed their progress for around 21 years comparing death rates between those who went to the sauna once a week and others who made more frequent visits.During the follow-up period they recorded 190 sudden cardiac deaths, 281 fatal cases of coronary heart disease, 407 deaths from cardiovascular disease and 929 deaths from ‘all causes’.The risk of sudden cardiac death was found to be 22 per cent lower for men who had two to three sauna sessions per week and 66 per cent lower for those visiting a sauna four to seven times a week.A similar pattern was seen for coronary heart disease, with two to three sessions reducing the risk of death by 23 per cent and four to seven sessions by 48 per cent.Cardiovascular disease death rates were cut by 27 per cent when men made two to three visits and halved when they made four to seven visits.For deaths from all causes, a sauna two to three times a week was associated with a 24 per cent lower risk of death and four to seven visits with a reduction of 40 per cent.Men benefited more the longer they spent in the sauna.Compared with men staying hot for less than 11 minutes, those whose sessions lasted 11 to 19 minutes were 7 per cent less likely to suffer a sudden cardiac death.

Sauna sessions longer than 20 minutes offering the most protection against heart conditions, the study found Spending more than 19 minutes in the sauna was associated with a 52 per cent reduced risk.A similar pattern was seen for fatal coronary heart disease and cardiovascular disease, but not for all-cause mortality.

The research, led by Dr Jari Laukkanen, from the University of Eastern Finland at Kuopio, is reported online in the journal JAMA Internal Medicine.Why saunas should have this effect remains unknown.The scientists wrote: ‘Further studies are warranted to establish the potential mechanism that links sauna bathing and cardiovascular health.’Most experts advise against saunas if you are very old or young, pregnant, and have a history of heat intolerance.Dr Rita Redberg, from the University of California at San Francisco, who is the journal’s editor-in-chief, said: Although we do not know why the men who took saunas more frequently had greater longevity (whether it is the time spent in the hot room, the relaxation time, the leisure of a life that allows for more relaxation time, or the camaraderie of the sauna), clearly time spent in the sauna is time well spent.’