I’ll never forget the first time my son spiked a 103-degree fever in the wee hours of the morning — and not just because it happened to be his first birthday. My baby was burning up and inconsolable, and as a nervous new mom, I immediately reached for the infant Tylenol. And I didn’t hesitate to dispense it every four hours or so, until his temperature returned to normal a day later. 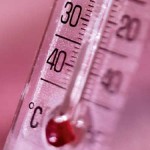 Looking back, I don’t think I could have waited, watched and done nothing for my sick, feverish boy, knowing that the medicine would probably kick in quickly and make him more comfortable. But a new report from the American Academy of Pediatrics says that far too many parents freak out about fever for no reason, and the group now advises that it’s often better not to treat a child when the thermometer is on the rise.

“Fever is the body’s normal response to infection — it’s a natural defense mechanism,” says Janice Sullivan, a professor of pediatric clinical care and clinical pharmacology at the University of Louisville School of Medicine and a co-author of the report. She says that a high temperature triggers the body’s production of infection-fighting white blood cells and inhibits the growth of viruses and bacteria. “If you lower the fever, you may be affecting the body’s ability to respond to that infection.”

Most fevers — generally considered to be a temperature 100.4 and above— come and go quickly, without any complications. Still, our collective fever phobia clearly runs deep: According to the AAP article, which appeared in last month’s Pediatrics, at least a third of pediatrician visits involve a fever; a quarter of caregivers say they would give a fever-reducing drug such as Tylenol or Motrin for a temperature of less than 100 degrees; and 85 percent of parents have actually awakened a sleeping child to dispense these medications — although sleeping is usually more important to the healing process than treating a fever.

“Fever is one of the more obvious signs of illness, so of course it worries parents, it worries doctors and brings the underlying illness to everyone’s attention, but most of the fears [about brain damage and other long-term effects] are unfounded,” says Lee Beers, a pediatrician at Children’s National Medical Center. “For a normal child . . . a fever is not going to get high enough to cause any kind of significant damage, so that’s not something you need to worry about.”

There’s also no reason to panic about fever-related seizures, which are generally short and not related to how high a temperature is, and almost always resolve on their own, says Sullivan. “The literature suggests that there are no long-term or permanent bad results from febrile seizures,” she says.

Still, this isn’t to say that you should let a really sick, uncomfortable child suffer. For starters, experts stress that infants of 3 months or younger should always be seen by a health-care practitioner if they have a temperature of 100.4 or higher. Beyond that age, doling out some meds can definitely improve headache, sore throat and general malaise. “But it’s important to recognize that this is not going to make any difference as far as treating the root cause of the problem, or help children heal any faster,” says Chevy Chase pediatrician Robert Shearin.

How do you know, for sure, whether to treat or not to treat? All of the doctors I spoke with suggest that it’s less about the exact number on the thermometer and more about the patient’s appearance and activity level.

“A child can have low-grade fever or no fever at all and look pretty ill, or have high a fever, be really sick and still look pretty good: The severity of the illness is not necessarily directly related to how high your fever is,” says Beers. “What’s more important is assessing how the child looks: How are they eating? Do they look sick? Are they urinating normally? Are they smiling, laughing or playing?”

If the answers indicate that your child is feeling seriously under the weather, that’s the time to consider giving medication, she counsels.

If you decide that a little Tylenol or Motrin may be in order, the AAP report stresses the importance of giving the correct dose, based on your child’s weight as opposed to his or her age. The article also questions the common practice of alternating Tylenol’s acetaminophen and Motrin’s ibuprofen to treat a feverish child.

Even though research suggests that this cycling treatment is more effective at reducing high temperatures, it’s unclear whether that actually helps a sick child feel more comfortable, says Beers. She adds that alternating acetaminophen and ibuprofen, which are generally very safe, effective medications, can increase the risk of dosing mistakes and potential side effects. “Tylenol seems so harmless, but it’s not an entirely benign thing,” she says, noting, for example, that giving a child way too much can lead to liver damage.

All of this advice holds true no matter your age: “An isolated temperature of 103 or 104 [in an adult] gets everyone nervous because of the number, but fever in and of itself doesn’t hurt us as we get older, and it can be therapeutic,” says Mark Abbruzzese, an infectious-disease specialist in Bethesda, who notes that the biggest source of concern with a sustained fever, no matter your age, is trying to stay well hydrated. “The only reason to take an antipyretic like acetaminophen, aspirin or ibuprofen is for comfort, and everybody’s comfort or discomfort level is a little different.”
(It’s important to note that you shouldn’t give aspirin to anyone under 18, since it has been linked in some cases to the deadly disease Reye’s syndrome.)

When should you start to be truly alarmed about a fever in a child? The signs of a more serious pediatric problem — a bacterial infection, for example — can include decreased activity or lack of responsiveness, headache with neck pain, acute dehydration, difficulty breathing, pain with urination and a fever with abdominal pain, says Sullivan.

For adults, Abbruzzese worries most about a relentless fever that doesn’t disappear over the course of several days, which can indicate a severe infection, malignancy or other problem. “It’s not that there’s never a need to see a doctor for fever, but you just have to look at the bigger picture,” explains Beers, who recommends following up with a health provider if there’s ever any doubt or question.