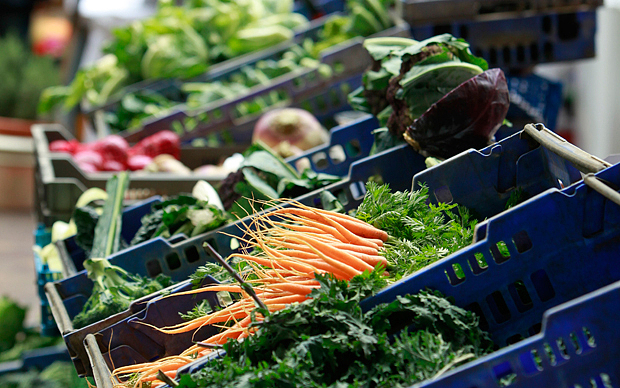 Vegetarians and vegans may be harming their chance of having children after a study found that men who do not eat meat have significantly reduced sperm counts.

Although a diet that is rich in fruit and vegetables can protect against many illnesses and can prolong life, it appears that it may also harm fertility.

Researchers at Loma Linda University Medical School, in southern California, embarked on a four-year project to find out how diets affect sperm.

The region has a high population of Seventh-Day Adventist Christians who believe that meat is impure and so are strict vegetarians.

Seventh-day Adventists live an average of 10 years longer than the American life expectancy of about 79 years and the researchers wanted to find out if their astonishing longevity might be linked to sperm quality.

However they found the opposite. Vegetarians and vegans had significantly lower sperm counts compared with meat eaters, 50 million sperm per ml compared with 70 million per ml.

They also had lower average sperm motility – the number of sperm which are active. Only one third of sperm were active for vegetarians and vegans compared with nearly 60 per cent for meat eaters.

The team believes that vitamin deficiencies may be to blame but also believe that replacing meat with soy could be responsible.

“Although these people are not infertile, in is likely to play a factor in conception, particularly for couples who are trying to conceive naturally. the old fashioned way.”
One factor could be diets rich in soy, the researchers hypothesis. Soy contains phyto-oestrogens which have similar properties to the female hormone oestrogen.

“The theory that we have come up with is that vegetarians are replacing meat with soy, which contains phytooestrogens and could be affecting fertility,” added Dr Orzylowska.

“For children who have grown up with those kind of diets, it may have impacted on sperm quality from puberty.

“It’s hard to tell people not to be vegetarians if they are trying to conceive, but I would caution against using soy, at least for 74 days beforehand, which is the time it takes for sperm to be replaced.”

The researchers also think that vegetarians and vegans may be deficient in vitamin b12. The study compared 443 meat eaters with 26 vegetarians and five vegans.
Separate research from Harvard University also found that a diet high in fruit and vegetables may impact fertility because men are consuming high quantities of pesticides.

Jorge Chavarro of Harvard University, one of the authors on the paper.
said: “There has been a lot of interest on whether pesticides may impact fertility in general.

“There is some evidence that both occupational and environmental exposure may have an adverse impact on male fertility.

“On the one hand, fruit and vegetables may have a positive effect on fertility, especially fruits very high in antioxidants.”

But he warned that pesticides in the fruit and vegetables could potentially have “opposing influences” on the good effects of antioxidants and other benefits.

The study looked at the sperm quality of 155 men who visited the Massachussetts General Fertility Centre between 2007 – 2012.

An apple would be tested with its skin on, but an orange peeled.

“We found men who had the highest intakes of fruit and vegetables high in pesticide residues tended to have lower sperm quality, specifically lower total normal count and mobile count” said Dr Chavarro.

Foods considered high in pesticides include celery. Those considered low include avocados.

Both studies will be presented at the American Society of Reproductive Medicine’s annual meeting in Hawaii.