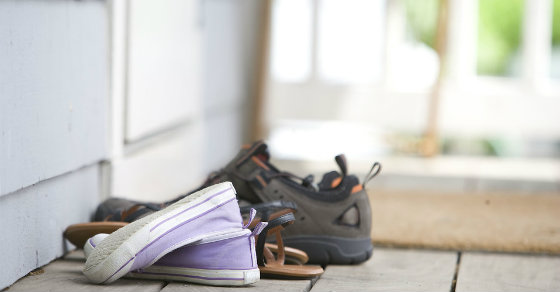 Have you ever been to someone’s home and they have all the shoes by the front door outside of the house? I have had several friends mostly from eastern and/or Asian families who do this. I always found it interesting personally considering growing up not many of my friends and family kept all the shoes outside. Most people I know take their shoes off at the door but some people choose to wear shoes in their home. Why would you wear shoes in your home? it’s beyond me! it’s more comfortable to be barefoot and it’s better to develop foot and angle strength also.

Some new information I discovered today is worth sharing though. The University of Houston did a study and found that 39% of shoes contained bacteria C. diff (otherwise known as Clostridium difficile), this is a public health threat that is now also resistant to a number of antibiotics. C. diff infections can cause multiple health conditions such as bad diarrhea which can also progress to colon inflammation and further serious health problems, especially if it doesn’t respond to antibiotic treatment effectively.

In another study done by the University of Arizona 9 different forms of bacteria were found on the bottom of shoes. Good Morning America did a test and found that the bottom of shoes were dirtier than toilet seats also. Furthermore, Dr. Charles Gerba, a microbiologist and professor at the University of Arizona did a test with a brand new pair of shoes and found that within just two weeks of wearing a new shoe 440,000 units of bacteria were found on the shoe. An astonishing 27% of that total bacteria were deadly E Coli. Klebsiella pneumonia was also found, which can lead to and cause pneumonia and wound and bloodstream infections and another type of infection called Serratia ficaria, which can lead to infection of the respiratory tract.

“Shoes are contaminated from diverse sources, and we are regularly contaminating our doorsteps by shoes,” says study author M. Jahangir Alam, Ph.D.

The Clostridium difficile is only the tip of the iceberg though because only 4 out of 10 people have this on their shoes. There are many different types of bacteria that get into your home from your shoe. For example, most most public restroom floors contain around 2 million bacteria per square inch (interestingly enough the average toilet seat only contains about 50 per square inch). These are two very good reasons to avoid wearing shoes in your home at all. If you have young kid’s who crawl around on the floor all day (whether 2 years old or 4 years old) it’s even more important to not wear your shoes inside your home. Children 2 and under should NOT be playing on floors that shoes have been walked on. It is best to leave your shoes outside the home if you have a one or two year old child.

What’s interesting is that many countries like I previously mentioned earlier in this article leave their shoes completely outside their home with that door closed so you cannot even see shoes in the home. A great idea is to leave them at the front door or in the garage by the door to avoid bringing any unwanted bacteria or germs in the home. What’s worse is that many of us will be barefoot in our homes (especially during the summer time) and to wear your shoes in your home even just once or a few times if you forgot something and are in a rush can potentially bring this dangerous bacteria in your home. Avoid it and do your best to keep the shoes outside for your health and safety.

Not only do shoes contain bacteria but they also contain germs, chemicals and oil or petroleum by-products. The bottom of your shoes are full of plenty of chemicals and pathogens that you do not want to spread all over your home then walk barefoot on later.

It’s uncommon in western countries such as America and Canada for guests to ask to remove your shoes at the door but most cultures around the world ask that you leave your shoes at the door. It will help keep those germs and bacteria out, as well as bacteria C. diff which can be more dangerous. Taking your shoes off at the door is a sign of respect for your home and the home of guests. In many religious traditions shoes are removed for prayer and entering the home. Shoes carry many germs and bacteria and it’s best to leave the outside world just outside your door along with your shoes.

Let’s recap, what’s on the bottom of your shoes? Fecal matter, multiple forms of bacteria causing fecal matter as well as infections and inflammation of the colon, germs, chemicals, petroleum and so much more! Where are you going to leave your shoes from now on? and maybe you’ll rethink that 5-second rule (or 5 BECOMING a 10-second rule) of dropping food on the floor and picking it up to eat it next time.

– This article was first published at : http://healthywildandfree.com/