by Trent Horn
Filed under Science, The Existence of God 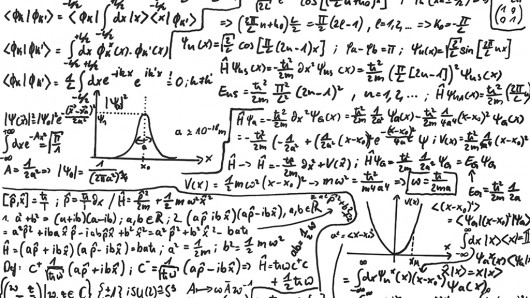 In a previous post I argued that a common atheist intuition about what would count as proof for the existence of God also provides a foundation for the intuition that something cannot come into existence from nothing without a natural cause. If this intuition is true, then it would provide much more support for the first premise of the Kalām Cosmological argument (KCA). For those who are unfamiliar with this argument for the existence of God, it goes like this:

I alluded in my previous article to observations in quantum physics that critics claim are direct counter examples to the premise, “whatever begins to exist has a cause.” These observations have also surfaced several times in the comment boxes here at Strange Notions. I’ll call them, collectively, the quantum physics objection. So what exactly is this objection?

Physics describes how objects move and behave in the world, but traditional physics has a limit when it comes to describing really small objects, such as electrons or quarks. For that we need quantum physics (also called quantum mechanics), which explains the nature and motion of atoms as well as the particles that make up atoms. Because these particles are so small, they can act in very strange ways. For example, scientists have observed so-called “virtual particles” emerging, apparently without a cause, from an empty vacuum. They have also observed atomic nuclei decay and emit alpha, beta, or gamma particles in an unpredictable way that appears to not have any cause.

If these things can occur without a cause in the quantum realm, then it seems that P1 is not true and the Kalām Cosmological argument is undermined or refuted. How could a defender of this argument respond to this objection?

Not Something from Nothing

The major intuitive support behind P1 is that something can’t come from nothing without a supernatural cause. The case of virtual particles “popping into existence” does not overturn this intuition because these entities do not emerge from “nothing.” They instead emerge from the quantum vacuum, or a field with a very low energy level. Columbia University Philosopher and theoretical physicist David Albert writes:

Albert’s reasoning also applies to alpha or beta particles that emerge from a decaying atomic nucleus, an event that is also not a case of “something coming from nothing.” Since the quantum physics objection does not invalidate the broader intuition “something can’t come from nothing” that undergirds P1 (i.e., “whatever begins to exist has a cause”), then we could reformulate the KCA and just rely on this uncontested foundational intuition:

Some people object to this reformulation because, in the words of atheist Aron Zavaro, “[M]odern physics has seriously challenged the common-sense intuitions which have given rise to belief in P1,” such as the intuition that something cannot come into existence from nothing without a supernatural cause. Zavaro goes on to claim that, “[T]he everyday man on the street would surely tell you that empty space stays empty! The man on the street would also surely tell you that a spaceless-timeless state could never produce anything without God’s help…such commonsense intuitions are false.”

However, I disagree with this critic’s assessment. First, people may not properly think through a hypothetical situation involving the word “empty.” If you ask most people what it would be like to spend 24 hours in an “empty room” they’ll usually say it would be “boring,” as opposed to being “fatal” which is the correct answer because you would suffocate after spending a few minutes in a vacuum without oxygen or even air pressure.

The normal man has a correct intuition that “empty” space cannot produce anything; he is just mistaken about a factual claim related to what he perceives to be empty space. The space he thinks is empty isn’t truly empty; it contains an invisible, low-level quantum energy field. Armed with that knowledge, the average man may indeed agree that small particles could come into existence from that energy field, but he would rightly judge that these particles have some kind of cause or origin for their existence. On the other hand, there is no further analysis that will demonstrate that a true state of “nothing” (or a total lack of being) can have a hidden property which allows things to come into existence through it.

It’s also debatable whether virtual particles and atomic decay are examples of “uncaused events.” Some interpretations of quantum physics describe events without causes, but others, such as the interpretation offered by the late David Bohm, include no uncaused events. Under Bohm’s view, (or the de Broglie-Bohm interpretation) the way particles behave or act is completely determined by the physical events that happened earlier in time. The eminent quantum physicist John Bell has praised this interpretation and laments the difficulty quantum researchers have in developing models that include truly free or random observers. He writes, “It is a merit of the de Broglie–Bohm version to bring this [non-locality] out so explicitly that it cannot be ignored.”2

The fact of the matter is that there is no consensus on which physical interpretation of the equations in quantum physics is correct and, more importantly, our inability to find a cause for quantum events no more justifies the conclusion that there are no causes any more than our inability to detect alien life justifies the conclusion there is no alien life in the universe.

Even if we suppose that a suitable interpretation of quantum mechanics is found that proves there are events which are uncaused, would that refute the KCA? I don’t think so because while it’s possible for events to not have causes (such as a ball to rolling to the right instead of to the left when set on a perfectly sharp cone) it doesn’t seem possible for things to not have causes (the ball just appearing for no reason at all).

Even if the event of a virtual particle coming into existence or the event of an atom decaying are causeless, it doesn’t follow that the virtual particle or the alpha particle themselves are without a cause for their existence. Their causes are the quantum vacuum and the decaying nucleus respectively. The events associated with the coming into existence of quantum particles simply have a probabilistic cause (as opposed to a predictable physical cause) which regulates their occurrence under given conditions. If this were not the case and these particles were truly mysterious, uncaused entities, then scientists would be unable to replicate in the laboratory the circumstances where these particles come into existence. John Jefferson Davis writes that:

“Quantum-mechanical events may not have classically deterministic causes, but they are not thereby uncaused or a causal. The decay of a nucleus takes place in view of physical actualities and potentialities internal to itself, in relation to a spatiotemporal nexus governed by the laws of quantum mechanics. The fact that uranium atoms consistently decay into atoms of lead and other elements–and not into rabbits or frogs–shows that such events are not causal but take place within a causal nexus and lawlike structures.”3

Similarly, the actions of creatures with libertarian free-will may not have an antecedent physical cause, but that does not mean that those actions occur “without” a cause. Just because I cannot predict exactly when a person will choose to speak, this does not entail that the words which emerge from her mouth are some kind of weird “uncaused” event. The words she speaks have a real though indeterminate cause.

A critic may try to use this line of argument and say that the universe may simply be an event that occurs under probabilistic causation and came into existence without God’s creative act. I don’t think this is a successful reply because events presuppose the existence of objects, space, and time in order for the event to occur. Probabilistic causation in the absence of anything cannot produce a universe any more than a burnt down casino containing the ashes of roulette wheels could, via probabilistic causation, produce a winner of a game of roulette. However, God’s ability to create ex-nihilo could allow for the simultaneous emergence of both the occurrence of the first event (the universe coming into existence) and the existence of the first thing (the universe itself).

Uncaused events in quantum mechanics do not refute the principle that something cannot come from nothing. Furthermore, the reduction of causation in quantum events to unpredictable probabilities does not refute our normal experience that objects simply do not appear without a cause. This leaves us with sufficient evidence to believe that “whatever begins to exist must have a cause for its existence.”